Would you like to switch to the accessible version of this site?

Don't need the accessible version of this site?

COVID-19 Update: We are using UVC Light that kills up to 99.9% of bacteria and viruses and true HEPA filter and Winix plasma wave technology.

Years of engineering and research by led to discovery of a water-energizing 2,780 nm YSGG laser and an air & water handpiece – both patented by BIOLASE – that combine to symbiotically excite water molecules from within both the spray and the target tissue. This results in a biological, effective micro-ablation of tooth structure, bone, or soft tissue

Heat, vibr, tion and pressure are the primary causes of pain associated with the use of the traditional dental drill. Since cutting both hard and soft tissues (teeth and gums) with the WaterLase does not generate heat, vibration or pressure, many dental procedures can be performed nearly pain-free with fewer shots, less need for anesthesia, less use of the drill and fewer numb lips! Additionally, using the WaterLase for gum procedures reduces bleeding, post-operative pain, swelling and the need for pain medication in many cases. It’s just a better way to get your dentistry done!

WaterLase dentists are able to remove tooth enamel decay (the hardest substance in the body), bone and gum tissue precisely while leaving surrounding areas unaffected. This conserves more of the precious tooth structure you were born with, helping you to maintain your natural teeth longer!

High speed drills can cause hairline cracks and fractures in the teeth that eventually lead to future dental problems. WaterLase reduces damage to healthy portions of the tooth and minimizes trauma. 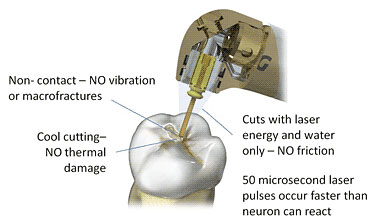 Due to its conservative, biologically based cutting action, the WaterLase performs many soft tissue (gum) procedures with little or no bleeding and less post-op swelling.

The WaterLase is extremely versatile. It can be used for a wide range of hard and soft tissue procedures. From decay removal, cavity preparation, root canals, smile design, gum, and bone surgical procedures and many others. Let your WaterLase dentist be a one-stop shop for you

How WaterLase Flies Under the Human Body's "Pain Radar" 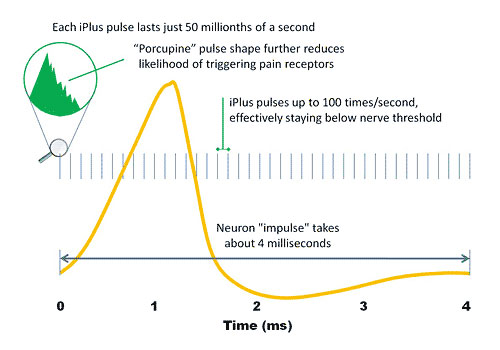 Our Biological Dentistry™ approach to diagnosis, treatment, and prevention is the logical result of our investigations into why conventional treatment with the drill causes pain, necessitates the use of anesthetic, and causes unintended damage to surrounding healthy tissue – negative consequences that have long been accepted for lack of a better solution. A fresh look at the anatomy and physiology of teeth and oral soft tissues showed us there could be a more biologically friendly way to treat them.

Tooth enamel naturally contains up to 5% water; dentin and bone up to 25%. Years of BIOLASE research led to the discovery of a water-energizing 2,780 nm YSGG laser and a handpiece that delivers air and water in precise proportions – both BIOLASE patented – that combine to symbiotically excite water molecules from both the handpiece spray and inside the target tissue. The result is an effective biological micro-ablation of tooth structure. The atomized spray of water and air continually re-hydrates the tooth, preventing heat and pain. We named this technology WaterLase©.

Why WaterLase YSGG Laser Energy is Superior to Erbium YAG 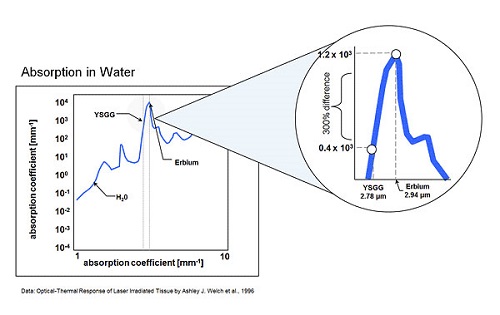 On hard tissue, an erbium laser will quickly vaporize the water naturally present in dentinal tubules and enamel prisms and damage the tooth, without the use a far greater amount of water spray than the YSGG laser. This additional water at the tissue surface means less energy is being absorbed by the hydroxyapatite and enamel, significantly reducing the cutting speed of the erbium laser.

On soft tissue, the erbium laser's higher absorption by water means that it draws more blood and fluid to the surface, dehydrating the tissue and obscuring the field of view.

The physics of the YSGG wavelength is perfectly balanced to remove enamel and dentin, and to surgically cut and coagulate soft tissue.

WaterLase was first cleared by the US Food and Drug Administration (FDA) to cut tooth structure in 1998, and since that time it has received numerous additional clearances from the FDA for a wide range of procedures on teeth, bone and gum tissue.

Send Us an Email

Find us on the map